Learn More
*Some restrictions apply, click "Learn More"
Settings
More
Verify Your Email
In order to vote, comment or post rants, you need to confirm your email address. You should have received a welcome email with a confirm link when you signed up. If you can't find the email, click the button below.
Resend Email
Reason for Downvote?
Login Sign Up
9
frogstair
330d

Doom 2016 is so underwhelming and left such an empty void inside me ugh
I played through the whole game in about 7 hours, got all secrets and everything, like a 100% completion.
The music is fantastic, it fits the gameplay, and in combination with the good sound design it's a great experience.
The graphics are good as well, there are some hiccups like the Hell Guards' force field which looked like a kid mapped a sphere with a 240p texture in like 2005.
The story was OK, it's not really present there, because it's a game about slaying demons.
They had a minimal story, but they still messed it up somehow.
The ending of the game is an absolute wreck. After three bossfights stacked back to back, each of which took me like 20 minutes first try, which is less time than I spend on some levels even, I faced the Spider Mastermind, where Olivia dies for some reason, very undramatically, she just plops on the ground. Then the Mastermind appears, whose attacks are childish, and health is lower than the Cyberdemon. I got done with him in about 20 minutes as well. He also dies very undramatically.
Then, the cherry on top. Hayden just leaves you. That's all. Nothing else is told to us. What happened to the Hellslayer next? Did he go back to hell? What will he do there if there is nobody there anymore? Why did Samuel decide on sending him back to hell and not in his tomb? Why did the Slayer even get a backup of VEGA if he's not planning on restoring it???
All of these questions are left unanswered and this is absolutely killing me rn

Such a game leaves the player at such an anticlimactic ending with so many cliffhangers. They better be working on the next Doom where this is elaborated. 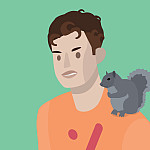