Learn More
*Some restrictions apply, click "Learn More"
Settings
More
Verify Your Email
In order to vote, comment or post rants, you need to confirm your email address. You should have received a welcome email with a confirm link when you signed up. If you can't find the email, click the button below.
Resend Email
Reason for Downvote?
Login Sign Up
22
F1973
54d

I am absolutely pissed and I'll cover multiple topics today.

I am paid peanuts. Literal peanuts for the kind of experience I have, the knowledge I possess, and the skills I bring to the table.

I work over time with absolutely no perks whatsoever.

My biggest mistake was I stayed loyal to this absolute shit brand who just squeezed more and more out of me every single day.

I am sooooooo underpaid that even if I get a 250% raise, I'd still not reach market standards.

I absolutely fucking hate my employer with burning passion for I learned or earned nothing here.

What more? With lockdown and work from home, they have increased our workload.

Not just that, they take pride in saying that team is working hard and over time.

Moreover, my sub-team is low on workforce so burn outs are more frequent these days.

Now they brought in this boomer retard who claims to have 30 years of industry experience but is absolutely nut. The stinking pig with torturing capabilities that of 4th dimension.

If someone is talking, he'll start his own story and talk over them. Forget rudeness, he doesn't even know how to talk yet he'll talk.

If someone interrupts to mention that he's been talking for past 2 hours nonstop and time is over, he'll still continue talking.

And in the end he'll put a disclaimer that he is new so learning and doesn't know anything about the product.

And then he'll talk some more.

For the sake of Gautama Buddha, stitch your filthy mouth and just stop.

Now we have these bi-weekly calls late at night. Everyone in the team already had screen time of 12 hours. We are mentally drained with no brain power left and this guys walks in full fresh ready to destroy our leftover souls.

People want to go for dinner. We have life outside laptop. Only if this idiot realises that he needs to stop.

Today he got on my every nerve and I dropped the call where every member of management was present.

The first thing tomorrow morning I'll be doing is either give him a sweet feedback or raise a concern with my manager.

Absolutely hating my situation and want to get out of this shite hole as soon as I can.

If you lack the ability to listen, be polite, or not respect other's boundaries/opinions then you can go and fuck yourself with a bamboo dipped in hot chocolate. 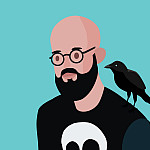