Learn More
*Some restrictions apply, click "Learn More"
Settings
More
Verify Your Email
In order to vote, comment or post rants, you need to confirm your email address. You should have received a welcome email with a confirm link when you signed up. If you can't find the email, click the button below.
Resend Email
Reason for Downvote?
Login Sign Up
2
vane
280d

if you eat a cake there is no cake, same if you grab a piece of cake, there is no 3/4 cake left there is something else yet to simplify the meaning of the world so we can communicate cause we’re all dumb fucks who can’t remember more than 20000 words we named different things as same things but in less amount, floating point numbers were a biggest step towards modern world we even don’t remember it

we use infinity everyday yet we don’t know infinite, we only partially know concept of null

you can say there is no cake but isn’t it ? you just said cake so your mind want to materialize something you already know and since you know the cake word there is a cake cause it’s infinite once created

if you think really hard and try to get that feeling, the taste of your last delicious cake you can almost feel it on your tongue cause you’re connected to every cake taste you ate

so if you want to change the world, find another thing that explains infinity and null and you will push our civilization forward, you don’t need to know any physics or math, you just need to observe the world and spot patterns 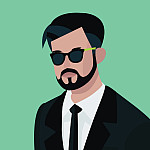